I wrote this once and my browser crashed and it didn’t autosave and I really don’t feel like writing it all again.

Let’s dive back into the memories of middle and high school – 2004-2006ish when graphic tees were the cool thing to be wearing.

I was going to a lot of concerts and shows at this time but was a little aggravated at the lack of cool shirts out there to wear to support my favorite bands. This brought me to thinking and designing some shirts.

The design for my first shirt

My first idea I had for a shirt simply said “hacker” on a grey background. Considering hacking and security is what got me interested in computers when I was 8 and I had already gained the nickname “hack” at school, I felt this was an appropriate idea.
It was printed on a cheap wal-mart iron as well as a $3 wal-mart tee.

I had some church friends who were starting a band and I had offered to make some shirts for their first local show. I set out and got 3 designs made up and went back to walmart for more iron ons and blank shirts. At their show I was able to make 1 of each size for all 3 shirts and sold 3 of them at the show. I had made my money back and had some left over and knew I could sell the remaining shirts to some friends from church.

I had a couple more design ideas and started working on them. I refuse to post pics because all I can find are pics of me wearing the shirts and no one is happy with their high-school self, right? Ha!

I eventually learned about screen printing and realized this is the route I needed to take. I didn’t fully understand every aspect so I started experimenting. I took a picture frame and cut up a mesh laundry basket I had. I glued the material on the back of the frame and cut out a stencil out of a  plastic folder. Of course the print out of this was absolutely terrible. I realized there was more to it than laying down a stencil so I went back to researching to see if anyone has built their own screen press.

At this point I hadn’t found anyone who has made one and posted pics. I started looking at screen pre-made presses online to get ideas and then set out to the garage to start building.
I’m pretty lucky, my step father had a bunch of random stuff and hardware always lying around. From this I was able to build the following:

This was a great starter for me, it taught me the basics of how to print.

Each of the arms has a bungie cord attached to it and an anchor in the middle of the spinning top. They also had a metal arm that would stop it retracting back too far. This all was incredibly ghetto but it worked for me and was all I had access to when I was 14.

The prints were by no means perfect but it was a stepping stone and lasted me through almost the end of highschool.

That’s really the end of my home-made screen press.
My senior year I bought a 4color screen press from Ryonet and by this time I had a decent amount of designs under my belt. I was even lucky enough to print our senior shirts for my chemistry class in highschool.

As fun as it was I didn’t have time to keep up with it and ended up selling off everything. It was a fun run at least!

You can see my old designs at the xStay Truex Clothing facebook page.

I must say I did love sending my stuff out. I ran across these old pics and wanted to add it.
I wanted my stuff to stand out and I used to love ordering from Design By Humans because of how they packaged their stuff, it really left an impression. I designed my labels and invoices to stand out. 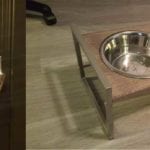